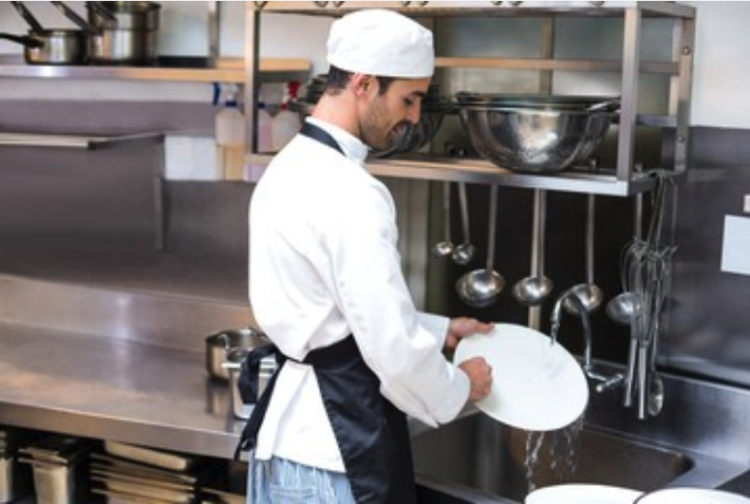 Washing dishes and hauling garbage might seem like the lowliest of kitchen jobs, with zero glamour or celebrity potential, but no restaurant can function without them.

No clean pots to cook in? No clean plates to serve food on? Restaurant at a standstill. A stuff-up of note.

Many of the greatest chefs started out as kitchen porters or dish washers – taking out the garbage, cleaning up everyone else’s mess, offloading deliveries, chopping up sides of meat and prepping mountains of vegetables, basically all the jobs no one else wants to do.

And if you think chefs work long hours – these guys get in before everybody else and they’re the last to leave after taking out the trash and sanitising the kitchen for the next round tomorrow.

Which is probably why any chef worth his salt recognises that the porter is an absolutely essential part of the team to keep the flow of the kitchen going. So much so that in the UK there’s an award for KP of the Year and you’ll find that these top “kitchen ninjas” have been with the same restaurant for a decade or more and are considered worth their weight in gold.

It’s also a profession that attracts some great characters – porters are often the guys credited with keeping spirits up in mad rushes, on slow days or when the chef loses his rage– and also some of society’s misfits.

I’ll never forget on my first kitchen job as a 15-year-old, a holiday and weekend job in the kitchen of the local hotel in the small town where I grew up in Donegal. The first person I witnessed as I walked into the kitchen was a guy in a crash helmet weaving through the chefs in their big hats.

I assumed he’d just arrived for work on a bike but an hour into my first task of peeling a bucketful of potatoes, along he came again – still wearing the crash helmet, but now bashing his head against the wall as he walked along with an armful of dirty dishes.

No one else paid any attention, so I carried on with my potatoes, spotting him later, crash helmet still in place, still banging his head, singing and talking to himself while washing a sink full of dirty pots.

Later, he came over and introduced himself, offered to take me under his wing and show me around and asked if I’d like “a cuppa tea and a little sandwich”. Of course I said I’d love that, and next thing I was tucking into Joey’s “little” sandwich – a hefty chunk of bread slathered in butter that he’d rolled up in his hands around a sausage.

From then on, tea breaks and lunchbreaks I hung out with Joey, who it turned out was on day release from the local mental hospital, and we became best of pals.

It was very common in those days for the shitty jobs to be done by mentally ill patients on day of release (the wave of immigrants into Ireland, willing to take on menial jobs, had yet to start). In fact the next dish washer that became my firm friend while learning the ropes of the kitchen was Eugene. Also on day release from a local sanitarium, he was the dishwasher at the hotel in Connemara where I went on work placement three years later, after finishing up at cooking college.

From Joey and Eugene, I got to understand that the dish washer guy does a lot more than wash dishes – he’s the glue of the kitchen in a way – and I learned my lifelong respect for the people who do the job.

Much later, when I opened my first incarnation of Peacock Alley in Dublin, I hired my Uncle Eamonn as the chief dish washer and he was the backbone of that kitchen for a decade or so.

Uncle Eamonn was something of the black sheep of the family. We loved him dearly, but he was always the guy that broke into song at a funeral, you couldn’t get him off the stage at a wedding, always the guy that would have more than one too many – his nickname was The Jackhammer because he was a wee, tough guy.

He became the famous kitchen porter of Peacock Alley, every young chef who went through my kitchen could tell you about nights of after service drinking beer with Uncle Eamonn.

The point is, I hired the wee tough guy because I knew how important the job was to the success of the restaurant.

It has become more of a profession now. The dish washer title has been upgraded to kitchen porter and where physical fitness, the ability to deploy elbow grease and stand on your feet for long hours used to be the only requirements, job ads now will talk about being a team player, organisational skills, calm disposition under pressure, ability to follow instructions, and knowledge of food hygiene, health and safety.

But the fact remains – a restaurant kitchen can’t operate without a constant supply of clean dishes and that’s why these guys are our heroes.