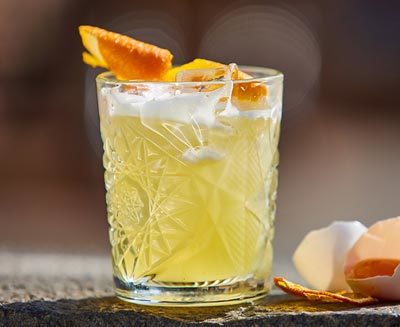 Some describe it as an after-dinner pleasure, others a sturdy wake-up call. Whatever your opinion, you can’t deny the Whisky Sour cocktail is one of the world’s most iconic and classic barroom innovations. But have you ever tried to make one yourself?  To help you from making a mess and wasting the good stuff, the team at Food concepts 360 has put together the best Whisky Sour recipe you’ll find anywhere.

Almost all of us have heard the name Whisky Sour before, some may have even given it a crack in the past, but the drink is making a serious comeback of late, and of course, it’s all Leonardo DiCaprio’s fault. In the early scenes of Quentin Tarantino’s Oscar-winning film, Once Upon a Time in Hollywood, we see DiCaprio’s suave and stylish Rick Dalton, settle into a bar seat with his good friend/stunt double Cliff Booth and a feverishly good looking Whisky Sour. It’s true, we see Dalton indulge in perhaps a few too many cocktails of varying poisons and palates, but the Sour is his go-to and it should be yours too. While we aren’t advocating you to start filling steins worth of cocktails as Dalton does, we do want to give you the tools to make the best Whisky Sour any at-home mixologist can.

What is a Whisky Sour?

A Whisky Sour cocktail is a bourbon-based mixed drink that is often referred to as a Boston Sour, the cocktail dates back as far as the late 1790s, when Vice Admiral Edward Vernon of England began mixing a few ingredients together to serve his crew. Battling scurvy and malnutrition, Vernon apparently wanted a drink that not only combatted sea-sickness but would not heavily intoxicate sailors. His answer was to water the alcohol down with lemon or lime juice. It was gin and brandy, but by and large, the Americans loved their bourbon, and thus, the Whisky Sour recipe was born.

Obviously, things have changed a little since those days, but the foundations for how to make a Whisky Sour have stayed relatively the same. The cocktail made its first appearance in written word as a mention in Jerry Thomas’ 1862 manifest, The Bartender’s Guide, with the concoction becoming a staple of dive bars, cocktail spots and mixologist work-stations worldwide. It’s not quite as simple as an Old Fashioned or a Margarita, but the best Whisky Sour recipe rivals any drink on the menu.

Served: Shaken; on the rocks

If you’ve ever tried your hand at putting together a cocktail at home, you’ll know that most are relatively easy. The Old Fashioned and the Margarita require few ingredients and little preparation time, but in the case of the Whisky Sour recipe, things are a little trickier.

To make sure our Whisky Sour recipe is a winner, 60ml Whisky (equal to two egg cups)

A lot of ice

Chilled glass (Pre-chill in the freezer 30 minutes before)

You’ll notice a few extra additions that set it apart from your stock-standard cocktail. If you are willing to put the time in, these are tried and tested winners.

What is the Best Whisky for a Whisky Sour?

For the traditional American-style Whisky Sour recipe, the cocktail calls for a sweet bourbon with light citrus notes and a touch of smoke. The natural sugars in bourbon allow the sharp flavour of the citrus to cut through clearly without being too overpowering. By using this spirit, you will avoid ending up with a Whisky Sour that is more sour than enjoyable.

Here is a list of the 7 best bourbons for a Whisky Sour cocktail.

After over 220 years making bourbon, it is safe to say Buffalo Trace knows what they’re doing. This Kentucky Straight is the ideal ingredient for your Whisky Sour recipe, thanks to its citrus notes.

The signature bourbon from Elijah Craig is a worthy addition to your Whisky Sour cocktail. This bourbon has a smooth balance of rich flavours, subtle smoke and warm spices.

This small-batch Kentucky straight bourbon is  refined through a unique filtration process using Texas Mesquite and oak charcoals. The result is a subtle smoky finish with a smooth flavour.

Aged in oak for over 10-years, this Kentucky bourbon is the perfect base for your Whisky Sour cocktail. At 45% ABV it is also a little stronger.

America’s oldest distilling company, Michter’s has released a bang-up bourbon perfect for your Whisky Sour recipe. This one is the brand’s premiere release.

Old Forester lays claim to the first bottled bourbon, way back in 1870. This Kentucky straight is a smooth reincarnation of that first batch and a worthy addition to your Whisky Sour cocktail.

Typically, peaty and peppery, the Talisker 10-year is a great addition to the Whisky Sour cocktail. “It’s a distinguishable single malt with its signature smoke, you can’t go wrong with any of the Talisker collection and it packs a little more punch at 45.8%,” Cameron and Jared said.

The best Whisky Sour recipe is a bit of a contentious one. Whether you are a fan of bourbon and citrus or you prefer a heavier, darker mix, you can make a Whisky Sour to match. With the help of The Whisky Mill boys, we’ve got an absolute cracker to share. Cameron and Jared have worked for years to refine their cocktail recipes, sacrificing many a night and memory in the process. We made sure they documented their absolute best and forced them to share it with us. Here is how to make a Whisky Sour this World Whisky Day.

The best Whisky Sour recipe deserves premium glassware to accompany. These sour glasses feature a rounded cup with stem, making them perfect for sweet, citrus drinks. The stem keeps the drink from warming in your hand.

Even though this Whisky Sour recipe is about as simple as they come, that does not mean you will not run into a bit of trouble on the way. Amateur mixologists and experienced bartenders have tried for years to reinvent the iconic cocktail, many falling short in the process. Here the Food Concepts 360 team explain the common Whisky Sour recipe mistakes you need to avoid.

Read through the recipe and method before you begin. Seems simple enough, but anyone who has tried to put IKEA furniture together knows the temptation of throwing the instructions away and winging it. Secondly,  the need for  fresh juice over from a bottle. Ensure you’re using freshly squeezed lemon juice and not pre-bottled concentrate.  Be sure to give your lemon a roll back and forth on the chopping board, applying pressure, to soften it and make it easier to juice (strain the seeds). The final tip is to ensure you add all your ingredients into your cocktail shaker before you add ice. This ensures the whisky sour isn’t becoming too watery whilst you add all of the ingredients.